Close
HomeHealthWhat Do You Really Know About Diarrhea?

What Do You Really Know About Diarrhea? 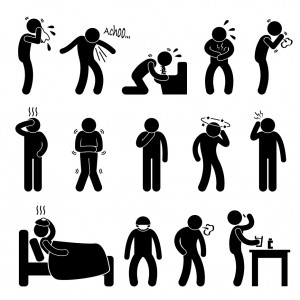 Diarrhea is a condition that affects millions of people every year. This condition involves the frequent passing of loose, watery and unformed feces. It generally lasts for less than 14 days. This troublesome disease could be caused by an infection of the small intestines, generally bacteria or viruses. Almost everyone suffers from this infectious diarrhea at some point in their life, including a vacation to a foreign land. An estimated, 2.5 billion cases of diarrhea were reported in the year 2004, resulting in 1.5 million deaths among children under the age of five. Further, about 1.7 to 5 billion cases of diarrhea occur every year and this condition is most common in developing countries.

Diarrhea is a condition in which foods and fluids pass too quickly or in large amounts through the colon at least three or more times a day. This condition often lasts for days and may result in dehydration due to excessive fluid loss.

Signs and symptoms of diarrhea:

The symptoms of complicated diarrhea include:

Most cases of non-serious diarrhea resolve themselves within a week. But, diarrhea that lasts longer than 3 days is a major concern and then you should head to the doctor. He will advice you or perform several tests to diagnose the condition. Below are some of the diagnostic tests of diarrhea are:

Treatment and prevention of diarrhea:

After diagnosing diarrhea, the most important aspect is treatment. There are different ways to treat diarrhea by avoiding dehydration and replacing lost fluid. Initially, to avoid dehydration, it has been recommended by the World Health Organization (WHO) to provide oral Rehydration salts (ORS) to the infected person because it contains sugar, sodium, or potassium, which are lost in diarrhea. Basically, medications, and changes in lifestyle, diet and fluid intake can only help in curing diarrhea, these are as follows:

Try to serve food right away or refrigerate it after being cooked because leaving the food at normal room temperature can encourage the growth of bacteria.
Wash your work surface frequently to avoid spreading germs from one food item to another.

Also Read: 8 genius ways to use veggies and boost health

Diarrhea affects the people who generally travel to countries and different cities where inadequate sanitation and contaminated food and water are encountered. Moreover, to reduce the risk, below are some key points:

Diarrhea is a condition that hits the global world about million times in a year. It causes a rapid depletion of salt and water from the body, and you should increase consumption of foods like banana, yogurt, and lemon juice. Care must be taken to maintain proper hygiene while handing food, as diarrhea can even involve long term hospitalization in more severe cases.

Also Read: How to Increase Your Metabolism?

Share this blog and let others know of the symptoms and causes of diarrhea. Also, post comments in case you have any health queries.